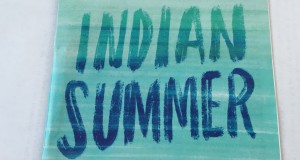 Ah, to be 17 and in love in the summer at the beach! Gregory Moss said he “wanted to write a play about love and the ocean and the summertime,” and he has done that and more with Indian Summer, currently playing at Playwright’s Horizons through June 26. Though I must admit that the jury was out for much of the first half of the play. The first act meandered and dragged on and I did honestly consider jumping ship after Act 1.

What kept me there was one of the last scenes in the first act, where the two main characters go into a role playing exercise about what they would say to each other if they met ten years into the future. That was a wonderful scene, and ultimately what catapulted the play into more than love, the ocean, and the summertime. In the end, I am glad that I stayed for whatever unevenness exists in the first act is more than made up for in the second act.

Indian Summer takes place in Rhode Island and brings together two teenagers: Izzy, a townie from the wrong side of the tracks and Daniel, a visiting resident for the summer. Izzy has a big, beefy, much older, and to be expected, not too bright, boyfriend named Jeremy who is first assigned to beat up Daniel by Izzy because he has taken her brother’s sand bucket. Daniel is staying with his townie grandfather, George, who is bereaved with the loss of his wife, and also seems to be one of those slightly crazy characters you see on the beach with a metal detector and who talks to himself. In this play, George talks not to himself, but to the audience. Normally I can’t stand instances where the fourth wall is broken, but in this case, it works well enough to be considered a good exception to the rule.

The play revolves around Izzy and Daniel and their shifting relationship as they fall into that tender, tentative summer love, interspersed with other scenes between Izzy and Jeremy, Daniel and Jeremy, George and Daniel, and George and Izzy. But it is Izzy who is the most fascinating character. She stands out among the three men as the one most willing to experiment with her potential and her ability to change. If at first her character seems inconsistent (an unfeeling, unintellectual bully), that view is softened as we see her spend more time with Daniel and become more curious intellectually and philosophically. Daniel pushes her to this point (though perhaps it is she who pushes herself) and ultimately Daniel seems the lesser of the two, the more emotionally timid and one wishes that he were a more robust leading man. It is hard to tell if this is the fault of the character or the casting of the actor, though it is probably a function of both.

The play is more episodic and impressionistic rather than plot-driven, which is partly why the first act drags a little. But there are four wonderful role-playing scenes that are almost dreamlike, that form the emotional heart of the play. They lead into the final scene with George, the old curmudgeonly grandfather who is the only one left on-stage and who delivers the final poignant soliloquy.

Indian Summer has its flaws. Daniel’s backstory ends up being a distraction rather than an addition and George’s bereavement seems too glossed over (is he crazy simply because he is a crazy old seaman or because he is grieving for his wife?). Jeremy is a hilarious character in the first few scenes, but after that seems to become more one-dimensional. And two hours and ten minutes is a lot of time to watch these four characters develop.

Indian Summer closes this season for Playwrights Horizons (a terrific season all around), and it is fitting to begin the summer with a play that allows us to remember our first love—whether it be at the beach or the pool or the lake—and to think about all the other possibilities that could have occurred had we just allowed ourselves to let them happen.