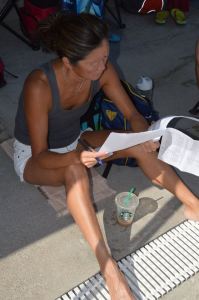 It is late June. The summer solstice has come and gone this wk and we are in the thick of summer sports: the NHL finals finished up early in June; the NBA finals concluded last wk (delivering Cleveland its first championship since a loaf of bread costs 20 cents!); the French Open concluded in early June and we are preparing for Wimbledon (the v exciting news is that Djokovic is in the hunt for a calendar year Grand Slam and I have the odds on him doing exactly that so definitely worth watching); the U.S. Open is done (congratulations to Dustin Johnson who closeted some disappointing ghosts of his past lost championships) and it will be the British Open in two weeks; and then of course there is the Tour de France, arguably the most underrated grueling of athletic events. This year we are not only in the thick of it, but we are literally wading through the thickest of the thick. In addition to the normal summer thick, there is the Copa America (which I had no idea was even going to happen until it was suddenly happening on U.S. soil); the Euro Cup (probably the second biggest soccer—sorry football—tournament next to the World Cup); and then the most exciting of them all: the Summer Olympics in Rio.

If I was always a little bit of a summer sports junkie, this soccer and Olympic plus year are just deadly. If I was already glued to the TV watching tennis and golf and the peleton as well as the occasional baseball game, now it’s soccer and the Olympics. But the Olympics aren’t just the 17 days in early August. The Olympics means Olympic trials plus the Olympics in August. So today, off-sports junkies (by that I mean, non-baseball fanatics) can watch the final of the Copa America, quarterfinal matches for the Euro cup, the U.S. Women gymnastics championships (Go Simone Biles!!), and Olympic trials for diving, along with the first day of the swimming trials. Btw, the swimming trials end Sunday, two days after the Track and Field trials begin, which also overlap with the U.S. Women’s Gymnastics Trials. Oh lord! So many great sporting events to watch. What to do?!!

(And let’s, btw, not forget about that all critical and important political race that is also occurring this summer…I, for one, am trying to keep as much distance as possible from all those unfortunate political shenanigans.)

NBC is broadcasting the swimming, diving, and gymnastics in prime time this wk. I suspect the track and field trials will be broadcast prime time as well next wk. It seems appropriate that I spent all of yesterday at a swim meet here in Florida yesterday. But now that we enter swimming, gymnastic, and track and field trials and head into Wimbledon, the tour de France, and the British Open and then the Olympics, I wonder how in the world I am going to have the time to fit in my own training amidst this steady stream of great sporting events.

But it’s the time! I can handle one or two sporting events. That would certainly motivate me and give me the time to get back out and train. But it’s not just one of two. This summer it’s swimming and diving and gymnastics and tennis and cycling and track and field and golf…it’s a full time job just watching all of these great athletes.

Btw – just a little aside for the swimming – this is the first year that the Olympic Swimming Trials have been completely sold out for every night. That’s 14,000 tickets for tonight and the next six nights. Wow! These trials are in Omaha, Nebraska, not exactly the most bustling metropolitan center, so that means that people actually made a conscious decision to travel to Omaha to watch the swimmer. This suggests an increasing popularity of swimming, which is great and which makes sense. I’ve seen it at the USMS meets as the rosters have only grown in the past few years and the competition has gotten very stiff.

What is one to make of this increased attention to swimming? Certainly, Michael Phelps, and then later Ryan Lochte and Missy Franklin, had a large part in this. I would love to think that Katie Ledecky also had some part in this, but her name brand outside of swimmers is right now far less than Phelps, Lochte, or Franklin (I am hoping that changes significantly after the Olympics because she is truly will go down as one of the great swimmers of all time). I also have to think that the increased popularity of triathlon has also helped. Which is somewhat ironic since a little bit of a rift has developed between triathletes and swimmers. But for now, I’ll leave that for later contemplation.

I would note that the swimming boards have been buzzing recently about the difficulty of the U.S. Olympic Swimming Trials. If the Tour de France is the most underestimated grueling sporting event, the U.S. Olympic Swimming Trials could be argued is the most underrated competitive event, simply because of the strength of U.S. swimming. This could just be dismissed as self-serving commentary. Even Rowdy Gaines noted in his commentary today that the NCAA swimming championships produce more Olympic caliber athletes than the Olympics themselves. But if that really is the case, then it is worth noting. It’s certainly puts a lot of pressure on all the swimmers, and much more so for the top 10 or 15. Especially since their glory days only come around every four years. So in all, and regardless of whether they are the most underrated competitive event, the fact that Trials are sold out is great news. And great news a long time in coming.

All this is a long way of saying that I am hereby officially checking out of training and of any other responsibility until after the Olympics and the U.S. Open (tennis, that is) officially closes the summer season of sports on September 11. (Ok – maybe not completely checked out, but you get the picture.)

It’s going to be a great summer. Go out and revel in the games wherever you are and whatever they are!